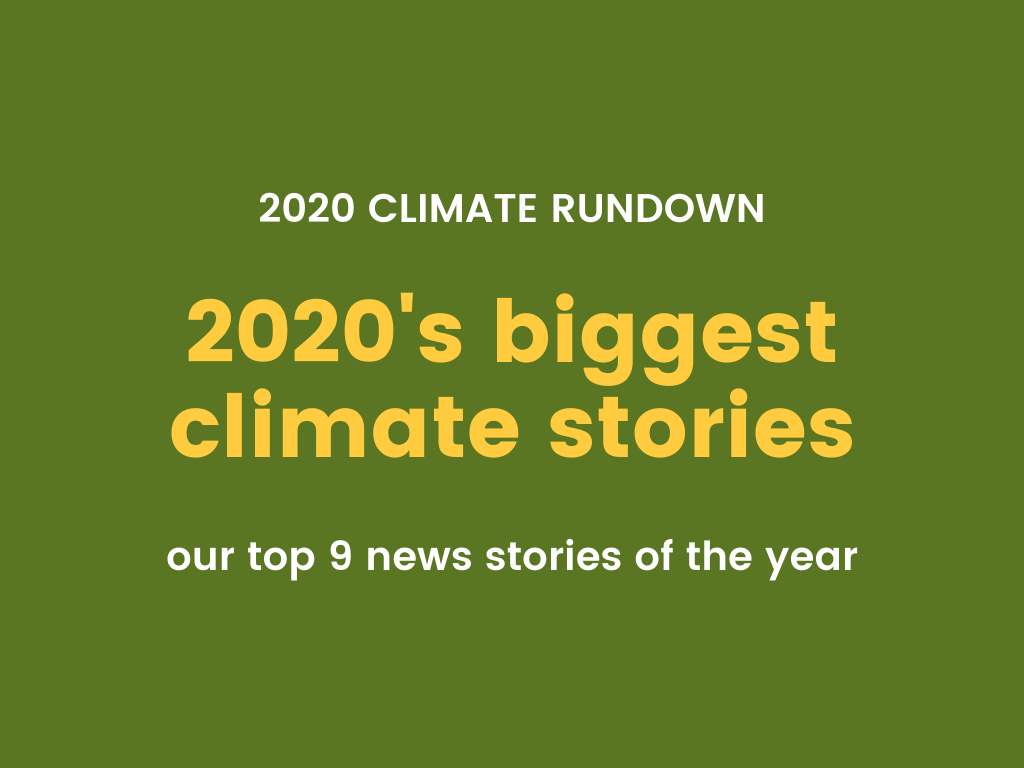 Shaping the Future of Climate Change: the Year’s Top Stories

The past year has been defined by the global impact of the COVID-19 pandemic, social and political tension in the United States and worldwide, and some of the most disruptive climate-driven disasters to date.

On the flip side, 2020 has showcased our ability to respond to major threats in record time through coordinated action. With a historic vaccination campaign just around the corner, the continued expansion of the clean energy market, and a global shift towards climate-conscious policy, it’s clear: the future of the planet is ours to decide.

Joro’s 2020 Climate Rundown takes a look at some of the year’s top stories – and the ripple effects that could shape the state of the climate for generations.

The COVID-19 pandemic drastically altered energy consumption around the world. With international travel halted and much of the global population confined to their homes, daily greenhouse gas emissions in individual countries dropped an average of 27% at the pandemic’s peak.

In total, scientists estimate that global emissions dropped between 4.2 and 7.5% in 2020. Some parts of the world, like Europe and the United States, achieved their lowest levels of emissions in several decades.

Unfortunately, on its own, this short-term slowdown is unlikely to have a lasting effect on climate change. That’s because the accumulation of greenhouse gasses in our atmosphere is the result of past and current emissions.

The Case for Green Recovery

In order for the pandemic-driven shutdown to have a lasting effect on global temperature rise, we need an economic recovery centered around green solutions. New research suggests that a recovery that prioritizes green stimulus and climate policy has the best chance of keeping global climate change within the 1.5ºC disaster limit. In contrast, a recovery fueled by fossil fuel bailouts clears a pathway for disaster-level temperature rise by 2050. The decisions we make in the coming months will shape our climate future.

Wildfires were up 13% in 2020, breaking the global record set just the year before. Hotter, drier weather and other climate-driven factors caused record-breaking wildfires in several countries, sparking mass calls for climate action.

From major carbon commitments to innovative plans for clean power, 2020 has been a foundational year in the search for a green path forward.

Populations of birds, mammals, fish, and reptiles are declining at a staggering rate. The 2020 World Wildlife Fund (WWF) report, which monitors 21,000 groups of nearly 4,4000 species, found global animal populations have plummeted an average of 68% in the last 50 years. Latin America and the Carribean have been disproportionately impacted, losing an average of 94% and 84% of their native wildlife, respectively.

Changing land use for food production is the biggest driver of habitat loss; about 50% of the world’s habitable land is already used for agriculture purposes. The 2020 report underscores the importance of developing ways to feed the growing human population while preserving precious natural habitats.

New research from Yale’s Climate Change Communication program shows a major shift in attitudes towards climate change in the United States. The program sorts citizens into “Six Americas” – with climate mentalities ranging from “alarmed” to “dismissive.”

A recent survey found nearly six in ten Americans now rank as “alarmed” or “concerned” about the state of the climate. This marks a substantial change from prior studies – in 2014 the climate “dismissive” and “alarmed'' claimed similar shares of the population; today, the “alarmed” outnumber the “dismissive” three to one. The dramatic shift suggests that the US population as a whole is becoming more conscious of the urgent need for climate action.

7. The Corporate Race to Net-Zero

In order to stabilize rising temperatures, companies across the world will need to reimagine the way they do business. This year, numerous major corporations responded to rising consumer demands for action with ambitious plans to reduce their climate impact.

United States President-elect Joe Biden has a more ambitious plan for climate action than any president in the country’s history. With over 14% of voters citing climate change as their top priority – second only to COVID-19 and the economy – he has more incentive to maintain his bold commitments than anyone who has ever held the office.

Biden’s carbon plan includes re-entering the Paris Climate Agreement, a transition to clean energy that prioritizes green jobs and smart infrastructure, and action against fossil fuel companies and other polluters that profit at the expense of marginalized communities.

See a full breakdown of the Biden administration’s carbon plan.

Although the current administration has reversed over 100 environmental regulations, climate advocates have kept the pressure strong. EarthJustice, a nonprofit environmental law organization, has filed more than one hundred lawsuits against the Trump administration over the last four years – and they’re winning.

To date, over 80% of settled lawsuits have been ruled in EarthJustice’s favor, including those that protect the Arctic from oil and gas drilling, prohibit coal leasing on public lands, and ensure key health protections against smog.

Closing Out the 2020 Climate Rundown

2020 has underscored the intimate connection between our political, social, and economic realities and our environment. This unprecedented year has shown us the power of globally coordinated action; the coming years will determine if we leverage that insight to combat the climate crisis.

Global change starts at the individual level – and personal change starts by understanding your impact. Joro users track their carbon footprint to find ways to live lighter. Our 2020 Carbon Year in Review breaks down our community’s collective impact.

Ready to jump-start your lowest-impact year on record? Download the Joro app today to develop your own personal climate practice.