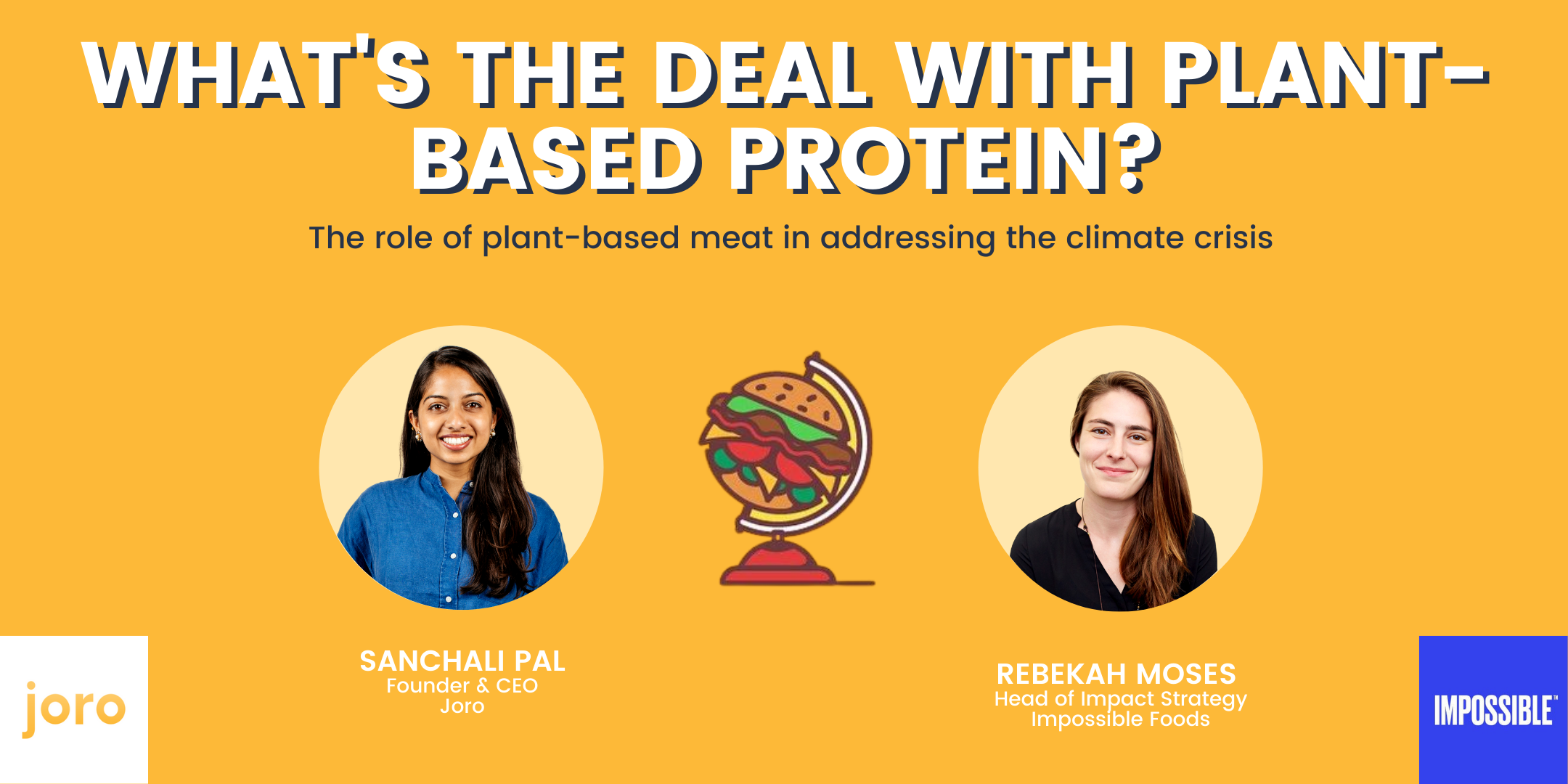 TL;DR: Rebekah Moses leads impact strategy at Impossible Foods. Her work focuses on how product innovation and consumer behavior can maximize environmental outcomes. Sanchali Pal, Joro’s Founder and CEO, asked her about Impossible Foods’ theory of impact, the role of individual food choices in addressing climate change, and their expansion plan. Below are some highlights from the conversation. You can watch the full recording on YouTube.

How did you become interested in sustainability, and how did you end up at Impossible Foods?

Thank you, first of all, for inviting me to this forum. I began my career in the defense industry, later leading to a focus on sustainable food systems. Following my graduate studies in International Agricultural Development at the University of California at Davis, I supported public sector development and agricultural research at UC Berkeley, Stanford, and Cal Poly’s coastal ecosystem ranch.

I have worked at the intersection of ecology, agriculture, and international development in the Middle East and domestically. My research contributions can be found in journals like the Public Library of Science (PLOS) and Journal of Applied Ecology, as well as via the USAID Water and Livelihoods Initiative online.

I should start by saying that beef is not inherently bad. It’s resource intensive in terms of lands, water inputs and it generates a lot of emissions. Now, we have about 7.5 billion people on the planet and many of them eat beef. As a result, we have about 1 billion head of cattle. So at scale, the effect on resources is exponential.

It’s also very desirable. It tastes good. It's a great source of protein and minerals. It hits a lot of the marks that we, as humans, desire in our food choices.

However, beef is the big driver of why livestock accounts for anywhere from 30% to 50% of the ice free surface of the planet. Livestock uses about 25% of fresh water on the planet, and it generates about 1/7 of global carbon emissions. It's not only occupying a huge amount of land that would otherwise be vegetated. Those are lands that should be sequestering carbon. Those are landscapes that would be, from a climate purpose, better capturing carbon through photosynthesis. So the system at scale is just untenable. It's not just the emissions from the direct production and transportation of beef, but also the opportunity cost of the land.

It's often non-intuitive to think about that when we're thinking about what we put on our plate. But it's the reason that the most important thing you can do, every single day, to address climate change is to eat a plant-forward diet. More so than about how you move yourself from place to place.

That's really interesting, can we talk more about impact measurement and specifically, the resource intensity of a traditional beef burger versus the Impossible Burger. How did you do the analysis and what did you find?

A good way to compare impacts between different products is by using a life cycle assessment. Through that method, we validate that plants are going to be much more efficient than the animal version. For every pound of Impossible Burger you're choosing, instead of a pound from a typical beef burger, you're saving about 90 gallons of water, about 300 square feet of land, and about 30 pounds of greenhouse gas emissions in the form of carbon equivalents. For one Impossible burger, this represents :

All that being said, when you multiply it by the 18 billion pounds of beef that are consumed in the United States alone, that's where you start seeing the real potential of products that are plant based as a substitute for products that are animal based, especially if you can hit those consumer requirements of taste.

What's in Impossible meat? Can you tell us about the number and quality of ingredients? Well, tell us what you can - you don’t have to spill the secret sauce.

Well, I'll tell you the secret sauce, because we're pretty transparent about it. The Impossible Burger is made with soy protein, coconut oil, sunflower oil. The soy protein is kind of the bulk of the burger. The coconut oil forms the fat and the potato protein holds it together. And then we have heme, which is the magic ingredient or the secret sauce. This is a big part of why our product is differentiated in the plant based alternatives field. We produce it through fermentation, but the protein itself is like hemoglobin, which is naturally occurring at the root nodules of soy plants. But again, the molecules are in every living organism and it happens to be very, very abundant in red meat. It's why meat cooks and tastes the way it does. It has this kind of catalyst dynamic once it's heated. And so that's a really important part for getting that consumer experience right.

The ingredients are mixed together and hydrated in big paddle mixers. Next, they go into a forming process of either bricks or patties and then we package them and ship them to stores. It is a process, but so is a cow.

9 out of 10 of Impossible Foods customers are traditional meat eaters.

Right, that's one of the things that struck me most - hearing Pat Brown speak about his founding story. He calls cows a technology just like anything else.

And I love that - because it is a process that our food is going through and we're accepting this cattle based process for coming out with protein that we enjoy eating. And simply creating another process doesn't necessarily mean that that is less healthy, certainly means that it's more efficient.

Can you tell us about your expansion plan? What markets are you developing next?

Our products are absolutely needed internationally, in particular in emerging economies where rising wealth is leading to increased consumption in animal products. There's emerging demand from places like East Asia. Unfortunately, the negative externalities of feeding that demand are going to come out of the Latin American subtropics. So the EU and US deforested a lot of land which is our baseline. New emerging growth that's coming up above the baseline of consumption is going to come out of new agricultural landscapes out of the tropics. It's not just the Amazon but the savannas where we're producing tons of soya to feed livestock and places like the Brazilian Cerrado. So I think it's incredibly, incredibly important to be able to feed international demand with these products, whether it's impossible foods or a competitor.

We just launched in Canada. We already have an international footprint in Hong Kong, Macau and Singapore. And we have a very big focus for international expansion in Asia simply because of that emerging demand. The international needs are acute, to say the least.