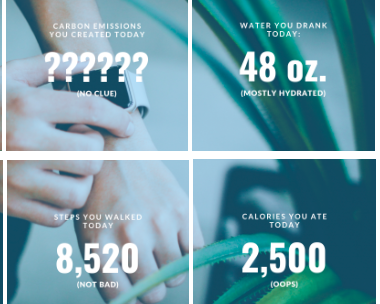 CAMBRIDGE, Mass. (April 22, 2019) – For Earth Day this year, Harvard-based startup Joro is launching a beta app that makes it easy for people to take tangible steps to live sustainably.

75% of millennials want to change daily behaviors to improve environmental impact, but 85% do not know their footprint or where to start. The first version of Joro’s beta app allows a user to automatically estimate the carbon emissions they create from daily activities based on their credit card spending, offset their footprint with a subscription to verified carbon offsets, and compete against themselves and others to improve their impact.

“People under the age of 30, who now comprise over half of the world’s population, believe climate change is the single most important issue of our generation,” says Sanchali Pal, Co-Founder of Joro. “It’s time we created better tools for people to align their actions and with their values.” Indeed, 16-year-old Greta Thunberg’s nomination for a Nobel Peace Prize and Global Climate Youth Strikes signal that individuals understand the strength of collective impact to change the status quo and create a positive future for our planet.

The U.S. is the world’s second largest emitter of greenhouse gases, giving it the power to make a significant difference in tackling climate change. Policies enacted by the government can set the country on the right path, but individuals also hold the power to change our trajectory. People having awareness of our impacts and making daily choices within our control to reduce emissions is a critical part of the solution. If every American were to reduce their own carbon footprint by just 12 percent, the country would reach its emission reduction goals as set in the Paris Climate Accord.

You can download Joro’s beta app on your IOS or Android device this Earth Day to see your estimated daily carbon footprint and your “carbon budget”, offset your footprint, and compete against yourself and others to improve your score. The team has ambitious goals to improve tracking accuracy, impact visualization, and social and gamification features.

ABOUT JORO
Joro is building an app and community for people to track and improve their carbon footprints and see small steps add up to big impact. For more information about Joro, visit www.joro.tech or follow Joro on social media @joroapp.

Stay in the loop.

Subscribe to our bi-weekly newsletter to get the latest on climate news and action tips.