What’s the Real Price of Carbon? 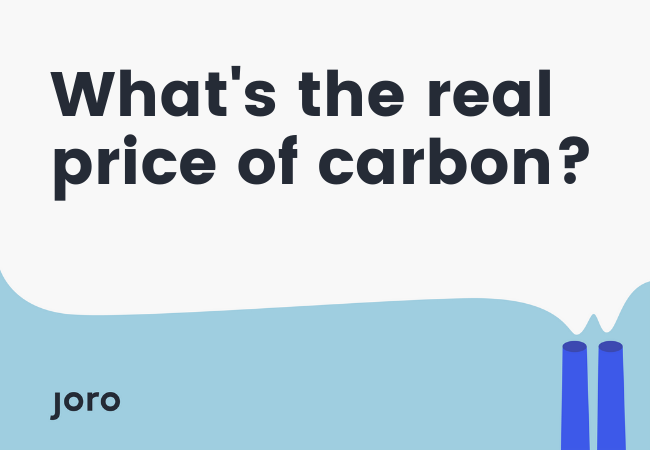 TL;DR: Effective carbon pricing is a critical tool to incentivize decarbonization and guide meaningful climate policy. But how we calculate the price of carbon matters, and there’s no global consensus on the process. In this article, we take a look at how carbon pricing works, and what it will take to accurately measure and make choices based on the true cost of our emissions.

We release a whopping 43 billion tons of carbon dioxide into the atmosphere every year. And it’s throwing the planet’s climate out of whack. To reverse the crisis, we need to break our addiction to fossil fuels and radically reshape the systems that run our global society. Putting a price on carbon can help us get there.

Climate change doesn’t just affect the weather. It has serious economic and public health consequences, too – like infrastructure damage, increased disaster aid spending, agricultural instability, and diminished air quality, to name a few. We call all of these “third party” effects negative externalities.

Carbon pricing assigns a monetary value to the negative external cost per ton of greenhouse gas (GHG) emissions. In other words: it puts a price on the damages the public faces from climate change.

A carbon price can be used to create policies that shift financial burden to the producers and consumers of carbon-intensive goods. Carbon markets are the systems that facilitate that process.

Traditional carbon markets regulate emissions in one of two ways:

Both taxing and regulating emissions create economic incentives for businesses and industries to decarbonize. But carbon prices need to reflect the true cost of GHG emissions in order for these tools to be effective.

So, what’s the right price of carbon? It depends on who you ask. Carbon markets exist around the world, but there’s no international standard for carbon pricing.

Different markets use different methods to measure the economic impact of GHG emissions, meaning the price of carbon can vary significantly. And while some markets are formally regulated by local and national entities, others operate as free and voluntary marketplaces.

Voluntary Carbon Markets in the US

The United States is the world’s second-largest emitter of greenhouse gases. And while a handful of states and geographic regions have local carbon pricing policies in place, there’s no nationally-regulated carbon marketplace.

People and companies who decide to buy carbon offsets on their own to finance carbon removal or reduction (e.g. Joro Net Zero Members) participate in what we call the voluntary carbon market.

The Challenge of Free Market Pricing

The voluntary market for carbon is growing in the US and worldwide. According to MarketWatch, the global voluntary carbon market is projected to reach nearly $515 million by 2027, more than doubling from $248 million in 2020.

On one hand, that’s great, because free markets allow anyone to finance decarbonization. However, because unregulated markets fail to account for the broader, true adverse impacts of carbon emissions, they tend to dramatically underprice carbon.

If voluntary carbon markets are to play a meaningful role in addressing the climate crisis, the carbon price they set needs to accurately reflect their real-world impact. If carbon is not priced high enough, we will not be able to hit the global targets laid out by the UN IPCC to halve global emissions by 2030 - and achieve global net zero emissions by 2050.

Figuring Out the True Cost of Carbon

Regulated and voluntary marketplaces both seek to value carbon credits. So why do prices vary so dramatically?

Voluntary markets are currently “free” - a.k.a. unregulated. Free market prices are set by supply and demand. They do not account for the negative externalities of carbon emissions. As a result, voluntary carbon markets can price carbon substantially lower than regulated markets.

In regulated carbon markets, there can still be price disparities due to differences in policy approaches. Some may assign more value to future or international effects, for example, while others are more focused on short-term, domestic impact.

In regulated markets, one way to improve carbon pricing is to enhance our understanding of the social cost of carbon (SCC). The SCC is a policy tool that seeks to internalize negative externalities to calculate the “true” cost of carbon. This helps policymakers and businesses better understand the long-term economic impact of decisions that would increase or decrease carbon emissions.

There is no global standard for measuring the SCC. One key factor in price disparities is the discount rate, which is used to value future damages and benefits against present costs. A high discount rate means we do not value future effects very much; lower rates consider them more important.

To achieve a net-zero world by mid-century, discount rates must place a high value on future effects. And many experts say this calls for a rate of 2% or lower.

The EU recently released “Fit for 55,” an ambitious plan to become the world’s first climate-neutral continent by 2050. To get there, EU carbon prices will need to rise to reflect the impact of present emissions on the bloc’s greater long term goal.

Small variances in discount rates can affect pricing outcomes substantially. And politics can influence the SCC chosen. At a 2% discount rate, New York state values carbon at $125 per metric ton. Compare that to the Trump administration, which valued carbon as low as $1 using discount rates as high as 7%. Currently, the Biden administration has set an interim SCC price of $51 per ton and plans to establish final figures by January 2022.

But many policymakers place the SCC much higher than that, with estimates ranging from $75 to $200 per ton. And as climate impacts become more acute - and milestone dates loom closer - experts say that figure should rise alongside them.

A Global Perspective on the Social Cost of Carbon

Climate change is a global crisis, but it affects each part of the world at a different scale. For some countries, the SCC may be significantly higher, because they face the threat of greater damages. According to The Nature Climate Change, India has the highest SCC in the world at $86 per ton, nearly twice as high as its estimate of the United States’ SCC.

Therein lies the challenge with measuring the SCC: while other pollutants stay fairly domestic, GHG emissions have global consequences. If a country produces very few emissions, it’s still vulnerable to the effects of climate change. SCC figures that don’t account for international damages fail to measure the true social cost per ton of carbon.

SCC pricing allows governments and companies to distill the complexities of climate change into a data point. But to accurately measure where and what has the greatest impact, carbon markets must apply a global perspective to these calculations.

The Future of Carbon Market Pricing

Carbon markets can play a key role in incentivizing and funding global decarbonization efforts.  But if we want to reach net zero by 2050, we need carbon prices to rise worldwide throughout the next decade. The SCC can help voluntary and regulated marketplaces price carbon more accurately, but only if it appropriately measures future and global effects.

Joro’s Net Zero Membership allows anyone with a credit or debit card to automatically cancel out your emissions by funding carbon removal through the voluntary market. As a member, your dollars support a small number of evidence-backed projects, selected to be part of Joro’s Carbon Portfolio.

As we assembled the Joro Carbon Portfolio, picking an appropriate price was critical. There are offsets available on the voluntary market from $1 to $1,000 per ton. So, how did we balance the Portfolio?

In assembling the Portfolio, we followed the guidance of the Oxford Principles for Offsetting.  The Principles set forth a few parameters: first, we must prioritize carbon offsets that actually remove carbon from the atmosphere, not just avoid or reduce emissions. Carbon removal offsets are generally a bit more expensive, starting from at least $5 per ton.

Offsetting is counterproductive if it becomes a license to pollute; that is why effective carbon pricing is essential.

Each month, Net Zero members can be assured that they are maximizing the impact of their offset dollars by supporting a balanced portfolio of the most effective offset projects on the market.

As consumers, we all have a hand in the problem – but that means we have a role to play in the solution. Joro helps you use the way you spend money to develop your climate intuition and reduce your environmental impact. But we live in a fossil-fueled world, and even the best among us will have a carbon footprint.

Become a Net Zero member today to compensate for the emissions you can’t eliminate – yet! To learn more about how we pick our projects, see our criteria for offset selection and explore our forestry, soil, and biomass offset primers.